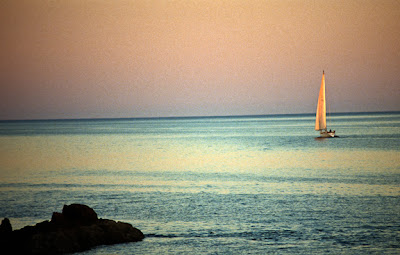 A FAQ (frequently asked question, for those of you who have only used a computer for a week) we get when people hear that we are going off on a one to three year ocean sailing trip is “Do you know how to swim?” Well, the truth is that I've just sent away for a 10 lesson, self-coaching, learn to swim program. But not because I think that swimming is going to save my life if I accidentally fall overboard or if the boat sinks. First of all, if you go overboard in a storm, say with 50 knot winds and 8 foot seas, no amount of swimming is going to save you, even if you are Mark Spitz. Second, if you fall aboard while, say, using the rail to save a trip below to the head, as males are wont to do, you won't be able to swim fast enough to catch up to the boat, and you'll be too far from shore (think 10-200 miles) to make it that way. So the way you prevent that catastrophe is to wear an inflatable life vest at all times that a trip overboard is even remotely possible and, in extreme conditions, keep yourself tethered to the boat. Besides, though I am a lousy swimmer, I'm not afraid of the water, and I can keep myself afloat almost indefinitely by turning myself into a jellyfish (try it in a pool sometime) and raising my head out of the water only for taking in each breath.


So why the swimming lessons? I grew up around the water, a few miles from Lake Michigan, and a mile or so from Mona Lake, near Muskegon, Michigan. Both were frequent destinations for me and my brothers and friends, and sometimes for the whole family, when I was a kid. I loved the water, but never mastered enough swimming technique to do more than the 20 yards or so to make it to the swim raft. As I recall, my two older brothers were quite good swimmers. I think they got their technique in the swim classes we were required to take in high school. That didn't work for me. Maybe because we had to swim in the nude, and my outstanding memory of that was my swim instructor, a typical (for that era) overweight ex-jock, asking me, as I was getting dressed in the locker room after swim class, why I thought that I needed to wear a jock strap. Needless to say, though I remember his name today, he didn't become one of my favorite teachers.

So what's a (nearly) 77 year old guy doing trying to achieve something that has eluded him for almost three quarters of a century? Well, for one thing, age doesn't deter me. I was well into my fifties when I became a proficient white water paddler in an open boat canoe. I was just shy of my 60th birthday when I learned to ice skate (another skill that my older brothers picked up, but that I somehow missed out on), and I became a pretty decent skater. I kept that up until a two foot high kid tried to skate between my legs in a crowded ice rink and sent me crashing to the ice. It was a year before the pain in my hip was gone, and that may have been why I needed physical therapy to strengthen my leg muscles now. The kicker was that I ran across a reference (in a book on cooking, of all things) to the Total Immersion method of becoming a competent swimmer. It promises to show you how to swim efficiently without tiresome drills and roadblocks like flutter-kicking a board from one end of the pool to another, in 10 easy lessons. I've bought my swim cap and goggles and tomorrow I hit the pool. We'll see how it goes! 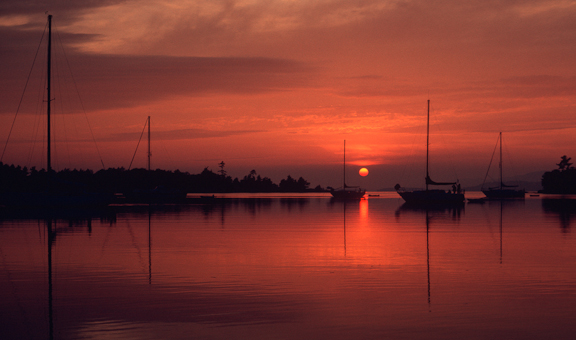 Posted by Fotogypsies at 9:15 AM 6 comments:

Once we decided we were really going to do the cruising thing, I began pouring on the steam in my personal fitness routine. It wasn't enough just to keep moving. I figured I was pretty fit for an old guy, but I wanted to be sure that I had enough strength and stamina to handle a 42 foot sailboat. I upped the ante on the weights and aerobic exercises. I even went so far as to go to a physical therapist to strengthen a knee that once in a while felt like it might give out on me. This was all going very well. Then one day, lying on the mat at the gym doing some exercise which was supposed to strengthen my butt muscles (the therapist said this would help my knees) I happened to catch sight of loose, wrinkled skin hanging from the crook of my arm. My god, I thought, that's just what an old man's arm looks like. That can't be me! The sight was made worse by the fact that I had been going through slides taken on our year aboard Escapade, 27 years ago. While I was never what you would call a hunk—I had what in my school days was described as an isomorphic rather that a mesomorphic build (you young ones, look it up!)--I still thought I looked pretty buff in the pictures.

That image was enhanced by the fact that my slender but well toned body sported what in those days we called a healthy tan. Ever since the day while walking along the beach in Barra de Navidad, Mexico, I started getting little rosettes on my arms from the sun, I haven't dared expose them to much sunlight. That, and the fact that I've already had a squamous cell carcinoma removed from one ear (ending my dreams of becoming a movie idol) means that I'm going to have to keep my body pretty well covered while we re-explore the island paradises. Angie says that's probably a good thing.

Posted by Fotogypsies at 1:08 PM No comments: