Can you imagine us in a tropical lagoon, lying on the deck of Bel Canto, the boat gently rocking in the breeze, as we watch the the man-of-war birds swooping over the palm trees on shore and sip our rum and pineapple juice concoctions, the faint sounds of reggae from the natives wafting over the bay? Or perhaps ghosting along over gentle ocean swells, the white sails looking like a seabird's wing extending up over the blue hull, listening to the murmur of the wake as the boat cuts through the water.

That's not us. The boat is in the boatyard, on dry land, propped up on jacks, while her mast lies 200
yards away. Shortly after we arrived home from our last work session in Annapolis, we got an email from David van der Spuy, our South African rigger, that the mast was coming down and he was ready to start measuring for new standing rigging (remember, the cables that hold the mast to the boat and keep it from tumbling down?) We wanted to see for ourselves that all this was really necessary, so we piled back into the Honda, loaded down with stuff that we will need if we ever do get under way, and headed back to Annapolis. The boatyard is sometimes facetiously, but accurately, referred to as “the dust bowl.” Dust from boat bottoms being sanded before the copper bottom paint, toxic to sea life and humans, is applied, and dust from fiberglass being ground down for repairs to damaged hulls settles over everything.

Looking over the rigging, we were convinced that David was right about most, if not all, of it. The inner forestay, a cable that runs from the deck in front of the mast about 2/3 of the way up the mast and to which the staysail is attached, was half severed at the upper end. This stay isn't essential for holding the mast in place, but two of the shrouds holding the mast latterly had broken strands, and many of the other stays, while seeming sound, showed rust. We decided that the prudent thing to do was to follow David's recommendation and replace all of the standing rigging that was original with the boat, hoping that when it came time to sell the boat, this would be a strong selling point.

Angie: We met Dave at the boatyard on Saturday morning to help him remove the rigging and measure it to order new. If we hadn't done it he would have had to hire someone else, so we figured between us we were earning $25 an hour. That's better than we had been making.  Part of our job was removing the halyards (used to raise the sails) and topping lifts (used to control the boom and spinnaker pole) from the mast. These run up inside the mast, so we had to run messenger lines up as we pulled them out so that we'd be able to get the new ones back where they belonged. While we worked, we talked (can you imagine?), and I learned all about Dave. He is descended from Afrikaners, the Dutch settlers in South Africa. They spoke a form of Dutch called Afrikaans, and some of Dave's speech patterns and sayings come from that. For instance, he said that if we were to put an eye splice in the end of one of the lines, it would end up looking like a pig's breakfast. The Afrikaners hated the English South Africans, who they thought were trying to gobble up everything for themselves. Dave's mother is English, straight from England, so I guess his father got over the hating. It was fun working with Dave. He has an upbeat personality and makes us feel better about all of the work we are doing. He's says she's a beautiful boat and we'll have great fun with her when we get these major jobs out of the way.

Getting back to Annapolis enabled us to coordinate the work that still had to be done on the boat. We talked to Ann Miller, who was supervising the bottom painting, and Sean, who came out to measure for the new dodger (he's also making the new cushions for the vee birth). And when we saw the mast down, we decided we needed all new wiring that runs up inside the mast to and from the mast lights, the radar, the wind instruments, and the radio/tv antenna. Some of these were undersized for the length of the mast, and some showed signs of wear and were liable to fail. So we got hold of an electrician and went over all the electrical jobs to be done with him. Chris Oliver, the engine guy, came and finished working on the engine, except for a few tests and adjustments that have to be done once the boat is back in the water.

Angie: Meanwhile we continued putting our things on the boat and trying to get it settled. This is really hard, because the vee birth is full of sails, and the solar panel, which came off the dodger so that it could be measured, is lying in the quarter birth. These are the two main cabins of the boat, and it makes it hard to settle these areas. And the galley is still partially disassembled, because you have to take that apart to get at the engine. Everything that goes on the boat has to come up the 15 foot ladder. I must climb the ladder 20 times a day. I don't think I've been on a ladder that many times in my whole life before, but I'm getting used to it.
In fact, I started cleaning and repairing a section of the rub rail that runs around the hull. To do that, I had to keep moving the ladder around the boat in addition to climbing up and down. It's no wonder that I'm exhausted at the end of the day! In my spare time (like when we're traveling back and forth to work in the car) I practice tying knots. I learned some essential sailor knots when we were on Escapade, but I'm more into it now. Jim just taught me how to tie a clove hitch around a piling. He said that when I get really good at it I'll be able to tie it around the piling from six feet away, and that will impress everybody. I've seen him do it, but I'm not sure I'll ever be able to.

We have been taking time to relax once in a while, mainly by going out to eat. We discovered a great breakfast place, 49 West, that has the atmosphere of a sixties coffee shop. They have great coffee and excellent quiche. That helps us not miss our Sunday brunches at the \AUT\ so much. We also stop in at night sometimes for chocolate covered almond biscotti and cappuccino. Our favorite place to eat is a Thai restaurant called Lemongrass. They have a great happy hour—all wine by the glass and hors d'oeuvres for five dollars, and their seafood dishes are out of this world! We've had dinner—three hors d'oeuvres, a main dish, and a bottle of wine—for less than going out for a snack costs us in Ann Arbor.

Two jobs we still have to get done before the boat hits the water is to repack the stuffing box and to fix a switch on the automatic bilge pump. The stuffing box is what keeps the water from gushing into the boat where the propeller shaft goes through the hull, and the bilge pump is, of course, what pumps out the water that does seep in. The list seems to go on forever, but we are making progress, little by little. And we passed one huge milestone. Just before we left Annapolis, the graphics people came out to put the new name on the boat. And yesterday we heard from the Coast Guard that the documentation, which makes the name official and also certifies her as our boat, was just completed. Here she is. 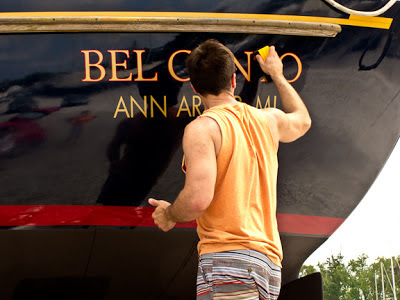 Posted by Fotogypsies at 8:55 AM