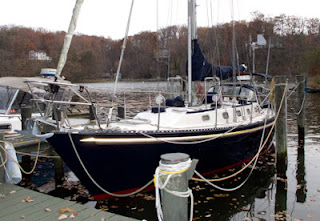 We went directly from the airport to visit Grover, owner of the Tayana 42, Outrageous, who kept the boat in a slip behind his house on a branch of the Chesapeake. Grover told us that if we bought the yacht we could keep her free in his slip while we got her ready for sailing in the spring and got used to her. That was a big attraction! What's more, he would spend as much time with us as we needed to learn everything we needed to know about the boat. This was a strong incentive, since Grover is a licensed captain who had worked for many years skippering large yachts and delivering boats all over the Atlantic Coast. He was the original owner of Outrageous, and though he is eighty years old and has two artificial knees, he was definitely capable of continuing the sailing life as long as he wished, but he and his young wife were running a business that ate up all of his time, so he had reluctantly decided to give up his sea home.

The boat was in beautiful condition, newly painted deep blue (a Hinckley color that appealed to Angie), and with a warm teak interior and many upgrades that a seagoing man (or woman) would think of to make a boat more comfortable and more seaworthy.

We spent the next two days looking at the other boats on our list, and several more to boot. They all looked good in the Yachtworld listings, but none matched up to Outrageous. They had worn teak decks that were going to need replacing soon at huge expense, or obvious structural flaws, or showed signs of neglect by their previous owners. Or they just didn't feel right inside.

There was one boat, a Valiant 40, listed with one of the brokers we talked to, that sounded like she might match up, but she was located in Florida. She had been completely rebuilt and re-outfitted by her owner, who apparently got more pleasure out of refurbishing yachts than he did sailing, since this is the third Valiant that he had done this to. She had a new engine, all new rigging, and was basically a new boat except for the hull. We went back two more times to see Outrageous. We debated whether to delay our decision until after a trip to Florida in February to see the Valiant. In the end, though, we decided that Grover as a resource outweighed some of the apparent advantages of the Valiant. Before we left Annapolis to catch our plane we called and made an offer, and after a little bargaining, it was accepted.

The next step in buying the boat was having her surveyed (like a contractor's inspection when you buy a house). We'll tell you about that later. 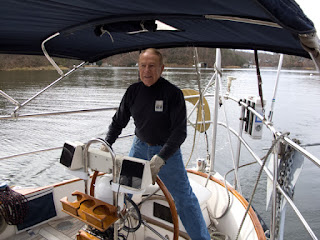 Grover at the helm

Posted by Fotogypsies at 2:28 PM