Finally! We disconnected the umbilical cords (the two shore power cables, that is) released our dock lines, and headed for the bay!

We had adapted pretty well to this life on Back Creek. Too well. The longer we sat here at the dock, while Ted and his gang work on getting our problems sorted out, the more apprehensive we became about taking the boat out and actually sailing it. It didn't help that the last time we moved the boat, to have it hauled out for installing some of out new navigational equipment, I managed to turn the wheel the wrong way, driving us into the end of the dock and scraping a bit of paint off the hull. And that was with Ted's whole crew of four guys helping me and Angie handle the boat.

The list of things that should be done before we set sail seems to keep growing just as fast as we check things off. (Sailors we talk to say that at some point you just have to throw off the dock lines and go. You never do run out of things that have to be fixed or could be improved.) So we sit here, and we tell ourselves that there are much worse places to be than sitting on our boat in Back Creek. And the cruising life isn't much different, no matter where your boat happens to be. But the truth is we get a little down spirited about the whole thing, and especially this morning when we got the updated bill from Ted (actually from Ted's office manager) and found that we had just about used all the money we had set aside for refitting the boat. And Ted had taken off for a long weekend without telling us. So we were sort of left hanging without being able to move forward on any projects.

Fortunately Ted had gotten the engine running reliably (it had been developing an air lock after running twenty minutes or so every time we started it up), and so theoretically we could take advantage of the lull to go out and practice boat handling. But did we dare? Neither one of us quite trusted ourselves to get our sixteen ton ship out of our slip safely, or more important, back into it. Then we had a brainstorm. Tom Yoho. Tom is kind of a jack of all maritime trades who lives on his boat here at Jabin's.  He does deliveries and just about anything else that people want done. (There's a picture of Tom in an earlier blog helping Dave the rigger with the mast.) So I went to find him to see if he would go out with us. He had a diving job to do, cleaning the bottom of a sailboat that, like us, had been sitting at the dock too long, but said he'd be happy to when he was back up from his dive.

So, finally, with Tom's guidance and help,we threw off our dock lines. We eased the boat out of her slip without incident and spent about an hour pirouetting around mooring buoys, approaching them from all angles, forwards and backwards, with Angie standing on the bow giving directions by mouth and hand signals. Then we headed down the creek and out into the bay. There was a nice breeze and a gentle chop, which Bel Canto plowed through effortlessly. After about a half hour watching the birds and the waves and the boats under sail, we turned around and headed back for the creek, our new chart plotter showing our position and our autohelm guiding the boat when asked to. Back in Back Creek we practiced once more coming up to a buoy and then brought the boat into the slip, with a bit of scuffling for lines but no real problems. Hurrah! a successful outing. Next time . . . we raise the sails!

Life on Back Creek 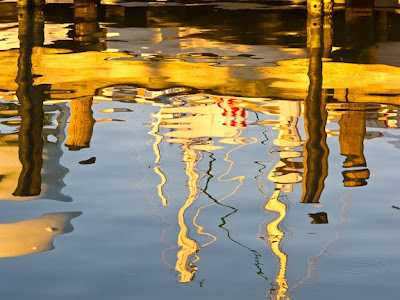 We're still at the dock but we've learned to enjoy living in our cabin on the water. We joke about having our vacation cottage on the ocean and talk about how nice it would be to just move it from city to city and experience living in each one for a while, then moving on. We are thinking Beaufort, South Carolina, Charleston, Savannah, St. Augustine. We could take that life for quite a while before we got tired of it.

After weeks of temperatures near 100, a cold front just came in and it's beautiful here. Ted is installing the new pod at the pedestal in the cockpit for all the new navigation instruments--a depth sounder, knot meter, and GPS, along with a new chart plotter that that will show us where we are and what progress we are making against the background of a navigational chart of the the area we are in. That sounds great--and it will be when we are able to leave the dock. We're making progress, but it seems real slow. We keep finding new little things like the manual bilge pump (a back up for when the so-called automatic electric ones fail) doesn't work. We'll get there. Our dinghy motor conked out, so we're debating whether to buy a new one. I met a sailor on another boat who may be able to look at it and diagnose the problem. Ted said he would fix it, but he has other projects to work on; we don't want to distract him. Jim is sanding the bright work on deck, trying to bring it down to bare wood for revarnishing. It seems like an endless task, but Jim regards it as a Zen exercise. I will eventually help him, but it's not my cup of tea. I'm very content sitting in the cabin reading Jane Austen.

I spend a lot of time learning about the boat. I've learned to listen to the a/c to hear if it's running properly, the water pressure pump to know when we are about to run out of water, and the engine, to know when it is about to die because of air leaking into the system. (Chris is supposed to come and fix that problem for us today, but he hasn't shown up yet!) I've also learned to tie a flying bowline with two quick motions of the hands.  Instead of going to the hairdresser or giving myself a pedicure, I make lists of what we need at the marine store and the hardware store. Washers, screws, sandpaper, work lights, tape, battens, inverters. 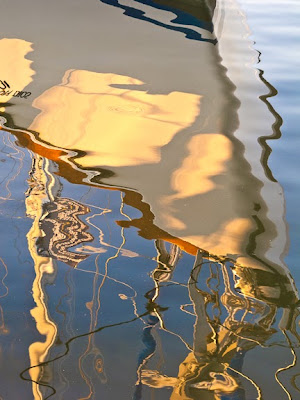 The inside of the boat is a mess because of the work being done. To get away, we hang out at a couple of different coffee shops in Annapolis and use the WiFi. We bought a hotspot device and internet service from Verizon, but we only get 5 gigabytes a month. Discovered that downloading movies from Netflix ate up too many gigabytes, so I had to quit Netflix, and now we're out of gigs until next month. We go to the movie theater instead. It's not the Michigan Theater, but we've seen a couple of good movies. The Lone Ranger and Red 2 both had us laughing. Tuesday is six dollar movie day, and since boat expenses have put us on a tight budget, we take advantage of that.

We eat like kings and queens. We're discovering every happy hour in Annapolis, and there are some great ones. We can eat dinner on half price hors d'oeuvres and a bottle of wine for less than we used to pay for a snack in Ann Arbor. Stuff like calamari, seafood egg rolls, crispy fried asparagus, lettuce wraps with grouper, Thai dumplings, avocado stuffed with crab. Cheap as it is, we can't afford to do that all of the time. We have been eating lots of seafood that we buy at the market. We'll probably start glowing in the dark from all the mercury. And Jim has learned to fry steaks that are almost as good as the ones he used to grill. There is a great Amish market in a mall not far from from the boat yard where we get good buys on meat and baked goods, and a market in the same mall, which we just discovered today, sort of like a combination of Whole Foods and Arbor Farms, where we got some excellent produce and good coffee.

We're surrounded by wildlife. Not only osprey and cormorants on the creek, but I've seen a fox several times at night time while walking alone to the bath house. Makes me really nervous because he/she stops and looks at me. Jim has never seen it. The other night we saw three river otters lying on a raft where our dock joins the pier. When they saw us, they slid into the water. They swam around looking at us for a few minutes to see if we were going to leave, but when we didn't, they did. And we've seen deer just outside the boatyard fence. This is all kind of strange, since we feel like we are right in the middle of the city.

Even though we've adapted to life in our waterfront houseboat, we are looking forward to the day when we can just take Bel Canto out into the bay and practice our boat handling. Our first experience leaving the slip wasn't auspicious. We had to take the boat just a few hundred yards to be hauled out again to have a through hull replaced and a new transducer installed for the new nav system. Leaving the slip, the boat got pinned against the dock, and Jim turned the wheel the wrong way to free it. The result was a bit of paint scraped off the hull. Ted's response, as usual, was, "We can fix that." There's a lot we have to learn about handling a 16 ton boat with a wheel, compared to our light weight Tartan 30 with a tiller. It's like going from a sports car to a semi-truck.

I watch all the boats leave each day to go day sailing. Hopefully, we'll be among them soon! 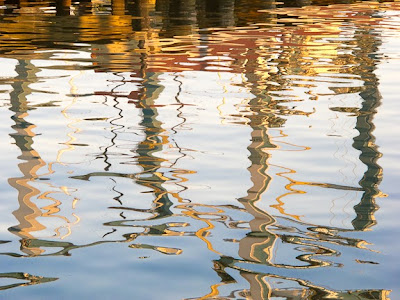 Posted by Fotogypsies at 9:09 AM 3 comments: