Thursday before Labor Day was another landmark day for us. With Dave, our rigger, aboard we took Bel Canto out for her first sail. It was a perfect afternoon, blue skies, wispy clouds, and about 10 knots of breeze, just enough to kick up a white cap here and there on the waves. Angie was at the wheel, a big smile on her face, while Dave and I raised the sails and Dave inspected and adjusted the rigging. The boat felt solid under us as she cut throughout the waves, never heeling much more than 10 degrees. On the weekend we took her out into Back Creek a couple of times to practice going REAL SLOW, stopping and backing, and approaching mooring buoys, all maneuvers that look deceptively easy but can be very tricky with a boat the size of Bel Canto, especially if there is any kind of cross wind. Then we took her for a short trip out in the Bay, doing some sailing under genoa (foresail) alone. Angie was at the helm, looking happy, while I handled the sail and figured out the course. We came back home and made an almost perfect docking in our slip. This is where the REAL SLOW is important, since I have to come between two pilings and stop the boat while Angie grabs one of the dock lines and secures it to the boat and then reaches for another with the boat hook. I'm supposed to get the other two while she does that and between the two of us we get the boat controlled before she crashes into the dock or swings over into the boat next to us. This all went very smoothly up to and including the part where I bring the boat into the slip and Angie gets control of the first dock line. Then I'm supposed to put the boat in neutral and grab the opposite line, but somehow I leave her in reverse (used to stop the boat) and she begins backing out of the slip like a balky horse refusing to go into its stall. Luckily there was another boater there to give us a hand, and no damage was done. As they say, "No blood, no foul." 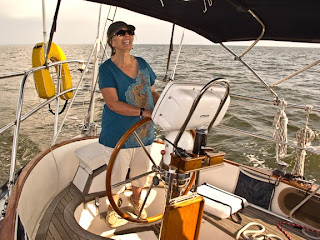 
Well, almost. We got up this morning in a beautiful little anchorage not far from Annapolis. Flat water, dead calm, clear blue sky, 64 degrees, a great blue heron decorating one of the docks on the shore. Breakfast of hot coffee, bacon, French toast. We sailed in here yesterday for our first night away from the slip where Bel Canto had been help captive for the last two months. This mini-cruise was a shakedown, both for our ability to handle the boat under sail and for practice anchoring, which we plan to do a lot of while we are cruising. The first part went beautifully. The winds were light, giving us a chance to practice our sail handling without too much stress on us or the boat. Bel Canto cruised along at about 4 knots in the light breeze, and we were delighted. Once in the harbor, our first attempts at setting the anchor failed, and the anchor kept dragging through the mud as we put the boat in reverse and tried to get it to dig in. The type of anchor we are using is called a plow. For a good reason, some people say, because it likes to plow through the bottom, especially if the bottom is muddy. Thirty years ago it was one of the best anchors to be had, but today there are some new designs that are supposed to work better. One of them is called a Spade, and it is supposed to dig into the bottom like one. We think maybe we should get one of those. Anyway, we pulled up the anchor and went looking for a better spot with better holding. Angie was at the helm again, while I was on the bow spewing directions and handling the anchor.

Things did not go so well. The anchor is connected to the boat by a heavy chain that goes over a windlass (for you non-sailors, a specialized winch with teeth used for lowering and raising an anchor). The windlass has an electric motor for raising the anchor, and a brake for lowering. As you let the anchor down you alternately ease and tighten the brake to control its descent. Here is a short version of how it went for us. We chose our spot, and Angie brought the boat to a stop. After the anchor got to a certain depth it stopped, even though I had eased the brake all I could. I gave the chain a tap with the detachable brake handle, and suddenly the chain was speeding out, landing in a big pile on top of the anchor before I could get it stopped. Not good. I started bringing the chain back up. As the chain comes up it passes over the windlass and goes down a hole into the chain locker. Well, most of the chain went where it was supposed to, but then it began piling up around the windlass. When I began letting the chain out again it formed a knot and wouldn't budge. I couldn't get the knot out by pulling it with my hands, but finally pried it free with a big screw driver. Meanwhile Angie was making a big circle with the boat. On our next attempt, the anchor stalled again, and again I tapped it with the brake handle to get it going again, only this time I was quick enough to get the handle back in place. But while doing this, I accidentally stepped on the foot switch used for raising the anchor, and the handle spun backward and jammed against the deck. This time I was able to get it free with a vice grip pliers. Another circle. Finally, exhausted, we got the anchor to hold.

The good part of all of this was that Angie got really good at handling the boat in an anchoring situation (lots of practice!), and I learned lots of things not to do with the windlass. We still think that a Spade anchor is a good idea.

One other big disappointment. We came here hoping to explore the creeks off the bay and maybe do some photography. But when we started the outboard motor on the dinghy it ran for a few minutes and then conked out. We're thinking a new outboard. Yamaha makes a nice little two and a half horse power motor that we think would be just right for us. There goes another boat unit!

There are still a few little things that have to be taken care of while we are at Jabin's, like getting an exact measurement of the mast for going under bridges. The mast of a Tayana 42 is supposed to be 64 feet, and the bridges on the ICW are supposed to have a clearance of 65. We want to know exactly where, or rather how tall, we stand. While we get this and a few other little things taken care of, we will try to get out on the Bay a few more times. Then by the middle of the month, we hope to leave Back Creek, begin cruising the Bay, and then, in October, making our way South.


Posted by Fotogypsies at 4:13 PM No comments: