We can't tell you how many people we have met in Beaufort who tell us, "We came here in (name a year) planning to stay (a few days, a week, a month) and here we still are, x years later." We can see their point. We arrived here on December 3rd, and though we do plan to leave and continue farther south (we really do), we have just signed up for another month at the Downtown Marina. Beaufort is a captivating town, claiming to have been named "the happiest coastal town in the East." 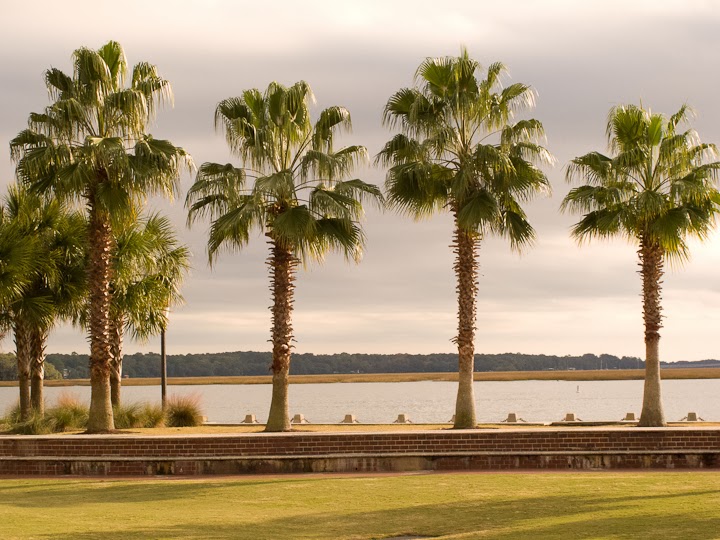 Beaufort begins to charm you as soon as you land at the elegant waterfront park. with its palm lined brick walkway along the Beaufort River, part of the Intracoastal Waterway. Then you stroll through "The Point," densely packed with pre-Civil War mansions built by the owners of the Sea Island plantations where their black slaves raised the indigo, rice, and cotton that at one time made Beaufort County the richest county in South Carolina. Walking among the mansions on streets punctuated with mammoth oaks draped with Spanish moss, you feel transported into another place and time. You can understand why so many movies, including Forest Gump, The Big Chill, and, of course, Prince of Tides, have been filmed here. 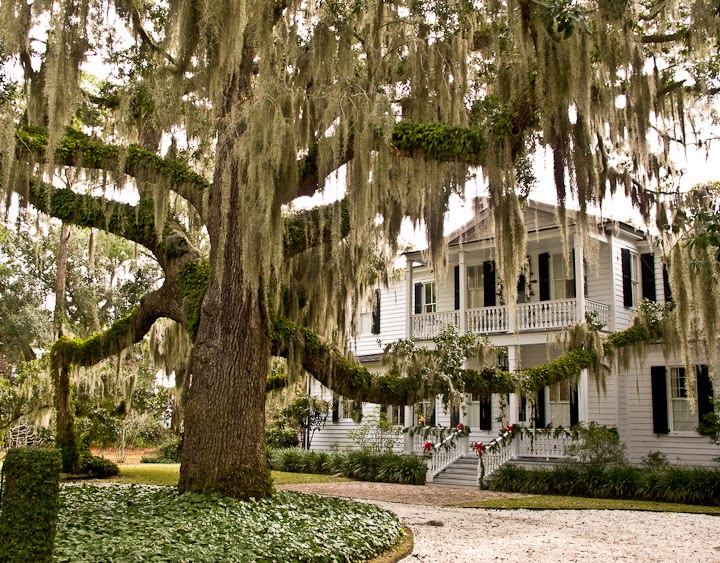 The history became even more real to us when we entered a gallery on Bay Street advertising art by four generations of a family who at one time were numbered among the local planters, as they called themselves. "Our family, like most of the planters here, treated their slaves very well," they told Angie after she had softened them up with some friendly chatting. "It was overseers who were responsible for the abuses you hear about." They didn't see the irony. The owners of the island plantations didn't live on them, but instead built winter and summer homes where the climate was more bearable and diseases like yellow fever and malaria less prevalent, leaving the management of the slaves who worked the plantations to the overseers. As a result, the black people who worked the plantations developed their unique dialect and subculture known as Gullah. When the Union troops occupied this area, in the early days of the Civil War, the owners mostly abandoned their lands, and the Gullah became among the first slaves to be freed when they were taken as "contraband" by the Union general. Many of them fought for the Union in the war, and one in particular, Robert Smalls, became a local hero. Captain of a merchant ship working out of Charleston, he gathered together family and friends and under cover of darkness snuck the ship past the Confederate barricades and delivered it, and his fellow slaves, to the Union army in Beaufort. He went on to serve three terms as a U.S. Congressman. The Gullah are extremely proud of their heritage and add a distinct flavor to both the food and the culture of this region.

The historic part of Beaufort covers about a square mile, and one of the great attractions for us is that the marina where we are staying is right on the main street, within walking distance of some great restaurants, bars, and art galleries. And we do walk. So much that we are recognized and greeted by many of the locals. And that's another attraction. People we've never seen before smile and say "Hello, how ya doin'" when they pass us on the street. It's an uncommonly friendly town, and that's partly because "local" is a relative term here. It seems like eighty percent of the people we meet have a story about how they ended up in Beaufort two or ten or twenty years ago. Of course there are natives here, but for the most part they seem to welcome rather than resent the newcomers. It's as though the indigenous small town Southern friendliness is a virus that infects all who come in contact with it. We happened to mention to one local resident who has a boat across the dock from us that we had some errands to do but that the marina courtesy car wasn't available. "Take mine," he said. We had to ask his last name in case we were stopped and had to explain why we were driving a car belonging to someone else.

John Marshall is one of the people who ended up here. Born in Detroit, he has lived in Florida, San Francisco, New York, Germany, and Virginia and traveled to Morocco, Argentina, Spain, France and Italy, before landing in Charleston and then here. John is a professional chef who lives on his sailboat here in the marina. He has opened a small restaurant/bar in town called the Old Bull. The  Old Bull is "closed" on Mondays, but the bar is open to all of the local wait people and musicians, who usually have Monday nights off. Everyone who comes in gets a cup of John's gourmet soup of the night along with their drinks. And in case you should ever visit Beaufort, the Old Bull has the most delicious food at the best prices in town. 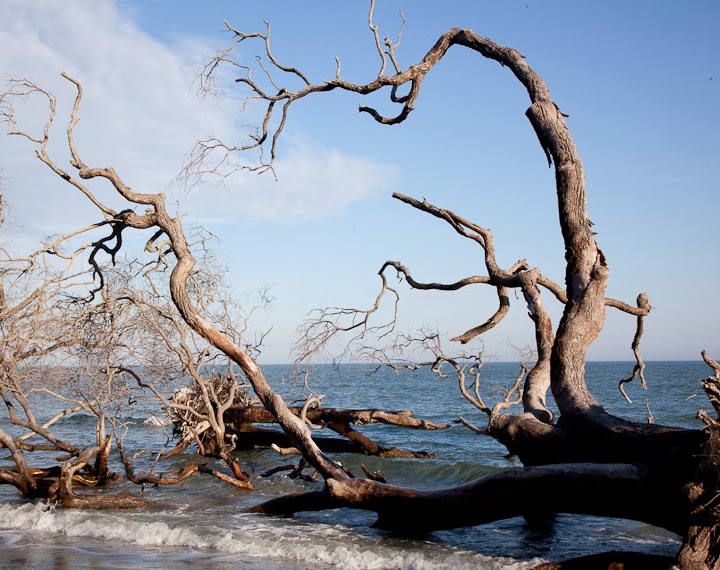 Because Beaufort County is made up of low-lying islands, bordered by tidal marsh lands, it hasn't become over-developed. Yes, there is Hilton Head, and there is a scattering of gated communities, but much of the area is in its natural state. Hunting Island has been preserved as a state park. Driving its winding trails through the mixture of palms and moss draped live oaks, you feel like you are entering  a primeval forest. It is a mystical, magical place. You half expect to see dinosaurs emerging from the trees by the lagoon.

This morning I get up and look out at the harbor where the sun is just beginning to chase away the light mist lying over the flat water and think that there is no place that I would rather be right now. So, yes, we will soon head out to experience some new territory. But not today.