When we lived aboard Escapade we had to learn a lot of new things about sailing and anchoring in tidal waters, but the technology was fairly simple. We had a LORAN, which would tell us our location within a quarter of a mile, a depth sounder, and a compass. Now we will have radar, GPS, a chartplotter—all new technology that we will both have to master, a mast so tall that we will have to duck when going under bridges on the intracoastal, huge sails twice as big as those on Escapade, a windlass to raise and lower the anchor, refrigeration, propane gas oven, generator, inverter—the list goes on and on. It's a different ball game now, and I feel overwhelmed just thinking about it.
At 42 feet, Outrageous is a lot longer and heavier than Escapade, a mere 30 feet long. So this summer we will be practicing and learning in the Chesapeake, sailing out of Annapolis, home of the U.S. Naval Academy. When I was younger, I thought if I ever joined the service, it would be the navy, and now I'll be sailing in their waters. 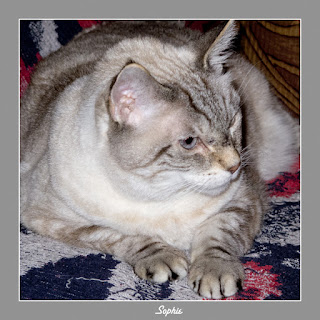 As we prepare for this adventure, my life is already beginning to change. The second most difficult thing for me to do was to give up my job at the U of M Medical School working with medical students and residents. I loved the job that I had been doing for eight years, and there were tears in my eyes when I resigned. The most difficult decision was to give up our Sophie, our 17 year old cat. Since her sister and littermate, Georgie, died four years ago, she has become much closer to us. I decided, though, that she was too old and set in her ways to go to sea. Fortunately, I found a new home for her with a really nice couple who love cats and who live on a lake. She will be able to look out on the water from her balcony, and that is the closest she will ever want to come to open water. I know that the new owners will take really good care of her, but I will still miss her terribly. When I'm sitting on the sofa and she hops up to cuddle next to me I begin to choke up thinking about it. She's been my entertainment and my buddy for seventeen years.

If you know me, you know that I am fashion conscious and love hats, scarves, boots, shoes, hair fascinators, etc. Women travel from all over the world to buy custom made hats at Fleur de Paris, a shop in New Orleans. I bought one a year ago when we were in New Orleans, a summer hat, and had my eye on another one for winter. Jim secretly planned to buy it for me for Christmas, and when we were in New Orleans in December for our 27th wedding anniversary he would have bought it for me. I'm sure Jim was amazed when I turned him down. I told him we could buy a new anchor for what the hat would cost. (My wedding presents to myself twenty-seven years ago were a 33 pound Bruce anchor and a rigging knife.) I think of what we have to buy for the boat—a life raft, perhaps a new motor for the dinghy, new cushions for the V-berth (forward cabin), a new anchor. . . and the list seems endless. What was I thinking when I yelled at Jim to come look at those photos of Small World?