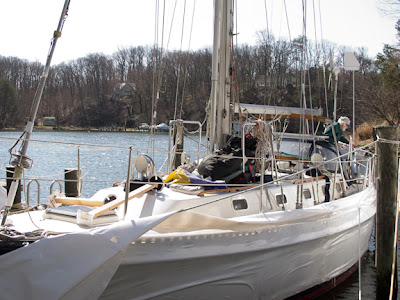 Little did we know what it was going to take to get Outrageous ready to sail and to turn her into our boat!

We are in Annapolis, working 6 to 10 hours a day on the boat. (On the “short” days, we spend several hours running around Annapolis picking up stuff we need.) The boat hasn't been sailed for four years, and for four years dirt has been accumulating. I have never done so much cleaning, polishing, scrubbing, and painting, and placing my body in weird positions to do it all. We don't have to go to the gym. The boat is still at the previous owner's dock, in Saltworks Creek at Annapolis. Sixty steps lead down a steep hill to his dock, and we negotiate these several times each day. At night, we drag ourselves to our hotel room, too tired for a night out on the town or to play the games (scrabble, chess) that we brought along to keep ourselves from getting bored.

The previous, original owner of the boat is a really neat guy. (You met Grover in a previous blog.) After we bought the boat, he had it shrink wrapped and kept it heated until we were able to come and begin working on it. And he's letting us keep it at his dock free while we get it ready to go to sea again. But Grover is a bit of a pack rat. He tells us he can't bring himself to throw away a bit of line (rope to you landlubbers), and I believe him. You never know when you might need some! And he had spares for the spares for the spares. He had prepared himself and the boat for extended cruising in remote parts of the world, and he wanted to be entirely self sufficient. I'm pretty sure that whenever he replaced an old part with a new one, he kept the old, just in case he might have to piece something together sometime. It added up to 25 years of accumulated gear, spare parts, and such. All well and good, but Jim and I wouldn't know what to do with most of the stuff, and besides we have to make room for our own junk. Also, there were multiple books on every nautical topic and dozens of VCR tapes for a TV/video player which we also threw out.

So we've been up to our . . . ears in work, going through drawer after drawer and locker after locker, sorting through stuff and trying to decide what to keep and what to get rid of. I never knew that you could store so much on a boat. The first day of this (our second day here) we got rid of 12 big garbage bags full of stuff. After a few days of this, it began to get real discouraging. But then we just decided that what had to go, had to go, and if we found out later that we needed something, we'd just have to buy it. Every once in a while Grover will come across something we are throwing out and say, “Do you really want to get rid of this?” Sometimes we keep it. We ended up carting away over twenty five bags of stuff. Fortunately there's a trail from the boat up to the road, and Grover loaned us his golf cart to get stuff up the hill, so we didn't have to haul it all up the stairs. But taking the golf cart up and down the steep trail is as thrilling as a carnival ride. 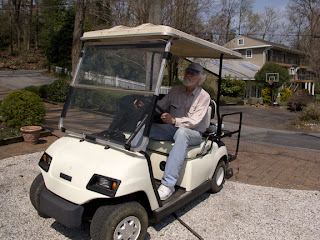 When we're not cleaning and sorting and throwing things away we are running around Annapolis shopping for marine items and talking and working with the people who specialize in some aspect of boating, e.g., graphics, engines, electrical work, dodgers (the boat's windshield), cushions, bottom painting, etc. It's real easy to spend money on this project. The old saying is that if you want to know what sailing is like, just stand in a cold shower and tear up $100 bills. We're finding out what the tearing up bills part is like. Only, it could be $1000 dollar bills!

We are getting daily inservice training on the mechanics of the boat, including marine toilet, diesel engine, bilge pumps, water tanks, refrigeration, and on and on. We have a crew of experts working on the engine, rigging, and the canvas. Our sails have gone to the sailmaker's to be checked, repaired where necessary, and washed. We've even had our 120 gallons of diesel fuel polished. And Grover comes around every afternoon, after managing his four coffee shops (and remember, Grover is 81 years old) to answer questions and help us out. Some day we may even be able to sail the boat.

There are several things that have to be done that don't exactly take an expert, but they do take knowhow and time, both of which we have too little of. Things like installing a new water pressure tank or a vent hose to the diesel stove. To our great fortune, Grover introduced us to someone who is has quite a bit of both (knowhow and time). Rob Sutherland has owned boats all of his life and lived aboard for seventeen years. Compared to Jim, he's a young man (only 64) and can crawl into spaces that are getting a bit difficult for Jim. He's already helped us out a lot and will continue working on the boat while we are in Ann Arbor. Thank the gods for Rob!

We haven't tackled the technology side of things yet. One addition we'll be making is a chart plotter. It's a little screen, usually by the boat's wheel, that shows the nautical chart (i.e., map) and a little icon that shows where the boat is. Some sailors have actually sunk their boats steering the icon on the chart plotter instead of looking where their boats were in the water. Sailors talk about having a satellite phone to the tune of $1500 plus $50 dollars a month for about 10 minutes of talking if you are sinking. We decided that we'll just sink and not spend the money. We will have a life raft and an EPIRB that gives off a signal that tells someone where you were when your ship went down. I'm not sure who that someone is.

We're getting things under control, though. We can see the light at the end of the tunnel, and the boat will be beautiful when we get done with her. And we are having fun, even if we are exhausted at the end of the day. Jim says he never could have taken on this project without me. He says I'm the driving force. We're nearly done with this phase of our work and easing off a bit. Jim is out on the dock washing sheets (the lines that go to the sails). He says he will do the pillow cases next. 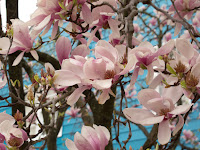 On our next trip here Outrageous will be taken to the boatyard and hauled out of the water to have her bottom done and for a few other jobs that have to be done while she is “on the hard,” as sailors say. One of those jobs will be to peel off her old name. Outrageous doesn't quite fit Jim's and my feelings about who we want her to be. The new name she will sport on her stern quarters will be BEL CANTO, Italian for beautiful song or beautiful singing. Home port, ANN ARBOR, MI.

Posted by Fotogypsies at 4:14 AM