Things a person must do before buying a 28 year old boat:
Get a thorough survey of the boat and read it carefully.

Get a survey of the standing and running rigging.
Get an engine survey.

We arrived at the boat on May 3, with a load of personal gear and equipment, ready to start replacing the 30 bags of stuff that the previous owner had left aboard with our own belongings, a major step in transforming Outrageous into Bel Canto. When we checked our messages before heading for the boat, we found one from David van der Spuy, the man we had chosen, at Tyler's recommendation, to check out the rigging, informing us that he and Tyler would be at the boat at nine o'clock to do the inspection.

David is a fascinating guy, a South African, slight of build and wiry, with a thick South African accent. After explaining to us what he was going to do, he strapped himself into the bosun's chair, attached the mainsail halyard to himself like an umbilical cord, and had Tyler begin winching him up the mast. Soon he was swinging around atop the 54 foot mast like an acrobat, calling notes to Tyler as he looked at every wire and fitting, from the mast top to the spreaders, and on down. He found several shrouds with broken strands, corroded fittings.

His final report was not encouraging. He recommended totally replacing the rig, except for the headstay, which had been replaced fairly recently. We should have been prepared for this. Some people recommend replacing the standing rigging (shrouds and guys that hold up the mast) every ten years, and just about everybody agrees that you shouldn't trust it for more than twenty. From a safety standpoint the standing rigging is the most important part of the boat. If a shroud or stay breaks, the mast can come down. And in any kind of a sea, the mast in the water, still attached to the boat by all of the wires that did not break, can wreak havoc, even to putting a hole through the hull and sinking the boat. 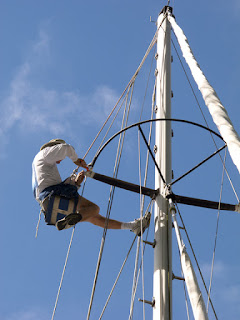 The report on the running rigging was just as bad. The halyards which are used for raising the sails, and most of the sheets and other control lines, had been left on the boat while she had been in storage at the owner's dock for the previous four years. Superficially, they looked great. Many were comparatively new. But almost all of them had spots where they had been exposed to water and weather, and these spots were mildewed and in some cases rotted. Lines used for running rigging are expensive. They must be strong, but soft enough to allow the crew to handle them comfortably. Like the wire rigging, most of the lines and the boat must be replaced. Dave demurred from giving us an estimate on how much all of this was going to cost until he had worked out a plan of action and priced out parts. Our 3 a.m. worry that night was that the cost of re-rigging might exceed the value of the boat.

Meanwhile, we went ahead getting the boat ready to be hauled from the water for the bottom work. On Monday, the appointed day, Grover and Rob met us at the boatyard (so that we would have transportation once we arrived there with the boat), and we piled into the Honda and headed back to Grover's. It took an hour or so to get the boat ready to leave the dock.

I wanted to handle the boat myself, but Grover convinced me that leaving his slip in the shallow creek was tricky, and that he should handle that part of it. As we pulled out, he demonstrated how by turning the wheel just so and gunning the engine in sync, you could get the boat to turn in it's own length.

From that point on, Grover stood by giving me tips on how to handle a 33000 pound boat, and Rob, the great guy who has been doing some work for us, helped Angie handle lines. The four mile passage down the Severn River from Grover's dock to Back Creek and Bert Jabin's Boatyard was easy. I just had to steer the boat in a straight line from point to point. We were motoring because the object was to get to the boatyard, not enjoy the ride. And the slight drizzle would have taken the fun out of sailing anyway. But I was scared nearly shitless when I learned that I had to bring the boat in between two wharves with barely more distance between them than Bel Canto is long, especially when the dock hands instructed us to turn around in there in order to have the stern facing the hoist.

Angie: We'd called ahead on the cell phone to let the yard know that we were coming in, and there were two workers coming out on the wharf to meet us. They yelled that we had to turn the boat around. I looked at the space and asked Rob, “Can we do this?” Now you have to know that this boat weighs 16 tons. That's a lot of boat to maneuver—about like driving a semi-truck. My job was handling the lines on the bow while the worker on the dock yelled out what we should do.

Jim: Grover told me to turn wide but be careful because she pivots near the stern. I nearly blew it by turning the wheel the wrong way at first, but then I corrected and gunned it and she turned on a dime, just as Grover had said she would. The stern swung a few feet from the wharf on the port side. The guys on the other wharf, where we were heading were yelling at me to slow down, so I threw her into reverse and gunned her. The dock worker reached out and stopped her with one hand and the prop rotation pulled the stern over to port. Everybody said it was a perfect docking, done like a pro, but I knew that I was just damned lucky!

On Wednesday we received Dave's estimate by email. It was bad, but not quite as bad as we feared. To make the necessary repairs and modifications to the rigging was going to cost $12000, more than a third of what we had set aside for all the repairs, additions, and other expenses we had planned for in getting the boat ready to sail.

Angie: (Wednesday, May 8) Another eight hour day working on Bel Canto. She's now in the yard, resting on her keel, braced by stanchions that keep her from falling over. So now we've traded a long ladder to board her for the 60 steps and Grover's steep trail. Yesterday we had monsoon rains and didn't get much done on the boat, but today is beautiful—cool, blue sky, light breezes—a perfect day to take the sails down. Oh, did we mention that the sails that we were so happy to get up the last time we were here had to come down again? Jim was awake a 3 a.m. the day we brought her over here worrying about how and when we were going to do that if it was necessary. Now we have some really big sails, especially the mainsail and the genoa (foresail). Together they would just about cover the floor space in our house. My trust level is really low, so when Jim said, “Let's take the sails down,” I envisioned a gust of wind toppling the boat over onto our car, or worse, onto the two brand new sailboats next to us. Our million dollars of liability insurance wouldn't cover the damages, to say nothing of fact that we would probably be severely injured or possibly die. Jim is a good teacher and has lots of sailing experience, but did I really trust him that it was safe to do this? Usually I just dive in and do what has to be done, but I was really nervous about this. But I knew that we had to do it because we were leaving tomorrow, and the sails had to come off for the mast to come down, and the mast had to come down for the rigger to do his job.


Jim: We lucked out on the weather. Taking down the sails would have been dangerous if there had been much wind from any direction but dead ahead. You see, the sails had to be raised in order to take them down because they come off the track starting at the bottom. But fortunately the breezes were gentle and right on the nose.

Angie: We worked a good two and a half hours doing this. We had to sort out all the lines and halyards, and there are many, but we got the sails down and we were very proud of ourselves. After we got the sails down on deck we had to fold each one (there are three), because we had to store them inside the boat. You start by folding them like an accordion. The nautical term is flaking. After they were flaked, we rolled them up, tied them, and struggled to get them below decks. The biggest sail must weigh about 80 pounds.

As we were stowing the sails, Ann Miller, who will be supervising the painting of Bel Canto's bottom, showed up. The keel is a reddish orange color now, and my main concern wasn't how much work the keel needed, or how much money it was going to cost (I let Jim worry about that). It was, “What are our choices of colors?” We all have our priorities, and I am bound and determined that we are going to make Bel Canto not only the best sailing vessel possible, but also the most beautiful. We finally decided on black for the bottom paint. It won't be visible except when we are sailing and heeled over a bit, but it will go well with the deep blue hull and red accents.

When Ann left I thought I would settle down with my Kindle, take it easy for a while, and read. Dream on Banjo Picker. Did I actually think the captain would allow me to rest while he was working? Jim had been removing the name Outrageous from both sides of the stern when Ann came. To do this he had to balance on the ladder, using a heat gun (something like a hairdryer) to heat up the vinyl letters so he could peel them off. This left a sticky gunk, which he had to saturate with Goo Gone and then scrape off with a plastic putty knife. It was hard, tedious work. He was getting ready to go back to this when he saw me with the Kindle. “I'm sure you can find something that needs to be done if you look around,” he commented. I could and did.


Getting an older boat ready to sail and live aboard is a lot like what happens when you buy an older house, or as Jim says, when you get married. There are always a few surprises and things you don't anticipate, and some of them can be quite costly. As we were on our way back to Ann Arbor, we got a call from Chris Oliver, who was working on our engine. The heat exchanger, which cools the engine by transferring heat from fresh to salt water, has to be replaced. That's going to be another couple of thousand dollar bills. I have to say that this has been a challenging project, not to mention an expensive one. But we are having fun working together and still eagerly looking forward to when we can move aboard and set sail.
Posted by Fotogypsies at 11:30 AM