Finally, Bel Canto is in the water and we are living (more or less) aboard. We were both excited to be spending our first night as actual liveaboard sailors! Jim was sure that he would get his first good night's sleep, without worrying about the next problem we were going to run into trying to get our boat ready. It seemed like every time we turned around, something new would crop up to delay us. Like when the electrician who was attaching all of the wiring from our newly rigged mast pointed out a through hull fitting, called a seacock, that looked like it wasn't seated properly. (A through hull is a hole in the bottom of the boat for water intake or outgo. If the fitting, valve, or hose connected to it fails, your boat begins to fill up with water and could sink.) He could move it with his hand. He said we'd better have it checked out while the boat was still “on the hard” (i.e., out of the water). So we called in Ted, owner of Seaside Marine, to give us his opinion. Ted took one look and began singing a requiem for drowned sailors. The seacock had been put into a hole that was too big for it, with 5200, a high grade marine putty, used to fill the gap. (Make up your own jokes.) It could have been okay for years before it began to leak, but then again . . . The solution was to take out the fitting, fiberglass the hole, then drill a new hole the right size, and reseat the fitting. This involved about five people and ended up costing us a whole boat unit ($1000).

So the mast was stepped, the through hull fixed, the stuffing box repacked, and we were ready to launch. The launching went without a hitch, with the owner of the boatyard himself towing Bel Canto to her temporary berth at the end of the pier. We had to be towed because Chris, the engine mechanic still had some adjustments to do on the engine. We moved a bunch of stuff from our car, where it had been sitting for more than a week while we moteled it, to the boat. Meanwhile, another Tayana 42 had come in and docked at the pier across from us. We went over to chat with them and ended up on their boat for “cocktail hour,” (sometimes referred to as sundown g & t). When we got back to our boat, the alarm indicating too much water in the bilge was ringing. We checked the stuffing box, and instead of the two to six drips a minute that were supposed to be coming in to lubricate the propeller shaft, a steady stream was flowing into the boat. To top it off, the automatic bilge pump which was supposed to react to problems like that wasn't working, and the switch had to be operated manually. So we were awake every hour pumping out the bilge. We got a great night's sleep the second night, though, and last night we sat in the cockpit under the light of the full moon, on our new cockpit cushions, delivered yesterday, listening to music from our cockpit speakers, and cooled by the gentle breezes that had come up after a near 90 degree day. Even though we are still in Bert Jabin's Boatyard, we could have been in the islands.

How many people does it take to get Bel Canto ready to sail? Well, there's Rob, who has been helping us all along. Then there's Dave, the rigger, and his helpers, Tyler and Tom, Richard, the electician and his partner, John, Mike, the diver, Ann, in charge of the bottom painting, and her two workers, Chris, the engine guy, Sean, the canvas guy, and on and on. Our count was up to twenty when Richard found the problem with the through hull fitting. That brought in Ted and his helpers, Todd, Brendan, Brian, and Benjamin, and a couple of others whose names we've forgotten.

We had planned to go into the water a week ago last Tuesday after the mast was stepped. Then it was put off until Thursday so that the electrician who was rewiring all of the instruments could finish his job. Of course, his job was made harder by the fact that all kinds of things had been added over the years, and much of the wiring was unorthodox, to say the least. And nothing obsolete had ever been removed, so the electrical system was quite a jumble. Then the electrician noticed the faulty throughhull fitting. So then we had a hole in the bottom of the boat and an expected launch date of the next Monday. Some of the guys working for us are getting a hundred bucks an hour, so the old joke about a boat being a hole in the water into which you throw money and watch it disappear is hitting uncomfortably close to home. One of the sailors here at the marina says you have to count boat units instead of dollars, each boat unit being a grand, and it doesn't hurt so much. It seems like we get one problem fixed and we find something else that has to be done. I (Angie) think about the Tennessee Ernie Ford song that my father used to sing—Sixteen tons and what do you get? Another day older and deeper in debt.

It turned out to be a good thing that we didn't go in the water on Thursday, since the derecho came through in two waves, one in the morning and one in the afternoon, with wind gusts that we judged to be at least 60 mph. Todd had warned us to get out of the boatyard because boats sometimes toppled over in a storm. We took refuge in the bath house, in the men's bathroom because it had no windows. (In my younger years I had a reputation for hanging out in the men's bathroom--Angie) But Richard stayed on the boat, finishing up the wiring.

But now we're in the water and able to enjoy living aboard Bel Canto, even though we're sitting at the dock in a marina. Friday Tom (We'll have to tell you more about Tom later—he is quite a character) helped us get the sails back on. We figure we're about 90 % ready to sail away, at least out to the middle of Back Creek, where we can anchor for free. And then we will be able to go out into the bay and practice handling the boat under power and sail. Hoorah! 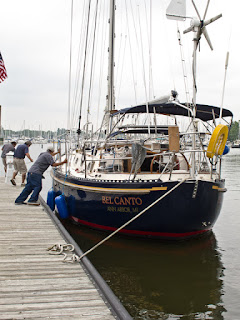