Our Skirmish with the Navy 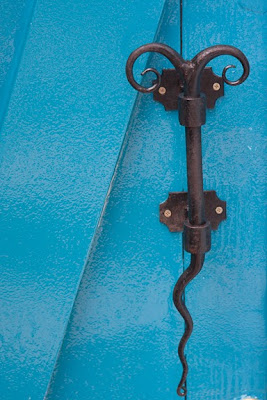 It's hard to get out and do anything with the temp up near 100 so I'm sitting in the air conditioned cabin of Bel Canto listening to Nat King Cole and trying to get my mind going to do some writing. There's a lot to write about, like our encounter the other night with the Navy. We were coming home from having a great seafood dinner at the Hemingway restaurant tucked in under the the Bay Bridge over on the Eastern shore. This was our first field trip by car to the Eastern Shore, and it was dark when we started the trip home on an unfamiliar route. I was just following the signs pointing to Annapolis, which also were pointing to the United States Naval Academy. In the dark I missed a sharp turn to the right and found myself in a narrow drive facing a military guard house. In her usual inimitable, quiet way Angie pointed out that I shouldn't be there. "Jim, you're driving over a curb and going the wrong way!" I was. But all I saw ahead of me was this gate and intimidating guard house. At this point a small but very solidly built creature in uniform came out of the guard house waving her arm at me, yelling "You can't go in there!" "I don't want to," I answered. "I'm lost. I just want to get out of here." "Can't you see the arrows pointing the other way," she demanded. "Somebody could be coming out!" (The parking lot was deserted.) "I told you, I'm lost.  I just want to get outta here!" "Don't interrupt me!" she snapped. "Just follow me." At the point I was ready to get out of the car and inform her that I was a civilian and she couldn't order me around like that,  but Angie restrained me. She walked away, waving for me to follow her around the guard house and pointed me toward the exit. "That's the way out!" But I told you I'm lost," I said again. Where do I go from there?" "Where do you want to go?" she asked. "I'm trying to go to Annapolis." She looked at me like I was an idiot. "You are IN Annapolis. Where in Annapolis do you want to go?" I told her that if she would direct me to the dock area I could find my way from there. She pointed to the left (the sharp right I should have taken). I still wanted to tell her that she had no right to talk to me like she had, but Angie convinced me that that would have been a bad idea, since all of the guns were on her side. 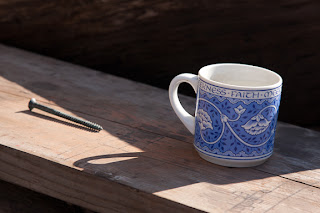 Ted, I guess you'd call him our marine contractor, says he sees the light at the end of the tunnel. Nearly all of the systems on the boat have been repaired or replaced. Tomorrow the sailmakers are bringing the last two sails to the boat, a spinnaker and a storm trysail, and also the missing battens for the mainsail. Ted and his main helper, Tod, are tackling the stuck head valve, and we are waiting the arrival of our all new navigation system.  We may actually get to go sailing one of these days. Meanwhile we are enjoying the fact that while stuck at the dock, we have air conditioning (which we won't have once we are out "on the hook"), a great seafood market nearby, a line on several good "happy hours" in Annapolis, and comfortable living quarters on the sea.  Life is good.

Posted by Fotogypsies at 5:24 PM