Sometimes it seems like the life of cruising sailors is 90 percent work and worry and 10 percent pure joy. We experienced a good dram of the joy on our trip down to Oxford, on the Eastern Shore, from Dividing Creek on the Wye East River. Even though we had to motor into the wind to clear the river and Eastern Bay, once we were out in the Chesapeake we had a fair wind and were able to finally make sail. For a little while we had a good breeze of about 12 knots and we were scooting along at six and a half to seven knots on a close reach. Bel Canto was in her element, and we were all smiles and high fives.

We anchored in a small bight off the channel in Town Creek at Oxford. There was one other boat, a pretty Hinckley yawl, already in there, so we couldn't anchor exactly where we wanted to. We were closer to some private docks and the shallow part of the bay than we liked, and the anchorage has the reputation of having a slippery bottom, but our new Manson Supreme anchor bit into the mud. Let's see, we're in 8 feet of water, and it's five feet from our bow to the water line. That's 13 feet total, and the right amount of chain to let out is five times that, or 65 feet. As the boat drifts back, I let out the chain. The depth alarm sounds, telling us than we're in less than our optimum eight feet. Depth sounder shows a little over seven. We check the tide, and it seems that we should be OK if Bel Canto swings to the end of her chain. Angie puts the engine in reverse and revs to 2000 rpm. The anchor holds. We're set.

As we were getting squared away and settled, a young couple rowed out to the yawl, waving as they went by. They boarded the yawl, and in a few moments, hauled in their anchor and left the anchorage. Now we had the decision of pulling up our anchor and improving our position or staying put. Out of inertia or laziness or whatever you want to call it, we decided that we were solid where we were. Even though there was a slight drizzle now and then, we decided that it was a good time to visit the village.

Oxford has pretty much closed down for the season. We went to a couple of boatyards, looking for lamp oil (our oil lamp does an amazing job of warming up our cabin a bit on these chilly mornings), bought a couple of spare fuel filters, checked at the small grocery store for lamp oil and bought a bag of our favorite Pepperidge Farm chocolate fudge cookies, and later in the day went back for a delicious meal at the Robert Morris Tavern, the only eating place in town that hasn't shut down for the season.

When we returned to Bel Canto, we found that a small cabin cruiser had joined us in the anchorage. She was anchored down wind of us, in the shallower water of the bay. She seemed to be a safe distance away, so we climbed into our snug little quarter berth for the night. 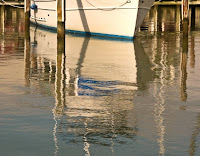 I don't know what caused me to wake up at a quarter after three this morning. Maybe sensing a change in the motion of the boat or hearing the gusts making the wind generator hum. Anyway, I lay there a few moments and then decided I needed to get up and check things out. It felt like the wind was blowing a good 20 knots with gusts to 30 or more. I opened the hatch to the cockpit and looked out. The little cabin cruiser seemed closer than it had the night before. I couldn't tell if it was because we had swung on our chain or the anchor had dragged. I turned on the nav instruments. The depth alarm began going off, and the depth meter showed between 7 and 6 and a half feet of water. It was low tide, so that in itself wasn't alarming, but I had to make sure we were still secure. I put on my longies and a fleece jacket and went out to the cockpit. Off to my right, on the boat's port side, I could see the docks we had been wary of yesterday when we anchored. On my left, on the shore across the bay, was a brightly lit mansion. I drew an imaginary line between them, which passed just aft of Bel Canto. If we reached that line, I'd know that the anchor was dragging and extreme measures were called for. Of course, these things always happen in the middle of night. For a long time I stood with my arms outstretched like a cormorant drying its wings, checking our position. 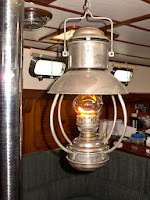 By this time Angie was up and had put on some warm clothes over her night gown. She started getting things together that we might need if we had to reset the anchor in the dark, specifically a spotlight and the headphones we use for communicating when she is at one end of the boat and I am at the other. As the boat swung back and forth in an arc of about 30 degrees, we increased our distance from the motor yacht, then watched it decrease again. I wasn't sure, as we drew closer, whether the decrease in distance was all because of our boat swinging on a longer anchor chain, or if we were dragging a bit. I started the engine, just in case. We spent a cold hour like this before deciding that we hadn't moved and that it was safe to go back to bed. By this time there was a red glow on the horizon from the morning sun.

Lessons learned: Have everything we might need in a nighttime emergency in a handy spot where we know where it is. This includes gloves for handling the anchor chain, pliers to open the sometimes balky shackle that holds the bridle to the chain, the handheld compass for checking the boat's position against objects on shore--and easy-to-don warm clothes!

Angie: I'm sitting in the quarter berth with a winter jacket and a hot water bottle getting warm after last night's excitement. I kept the hot water bottle and Jim from our last boat, Escapade. I also kept the 33 lb. Bruce anchor which I bought for myself. This time around, I insisted on buying a new one, either a Rocna or a Manson, although just about everybody tried to talk me out of it, and I'm glad that I did. I don't think this is how most people imagine our lives, but this is just another aspect of boat life. Where are those white sandy beaches, palm trees, and rum drinks? 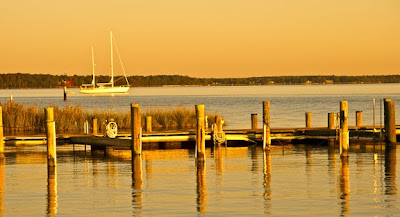