Typical Day on the Waterway

Nov.16: It was foggy this a.m. so we are not moving, but it turned into a beautiful day. I got some great fog photos. I'm really liking my 70-300 mm L series. I can hand hold it on the boat even though the boat is always in motion. The stabilizer helps me to make images that are in focus, most of the time.

Today we finally got to shed our long underwear, watch caps, 2 pairs of gloves, 2 layers of clothes, winter jacket, heavy socks, and scarf. So much for balmy, tropical weather. This is an unusual cold fall on the East Coast. We traveled at the same time 28 years ago and according to our log the weather was great. 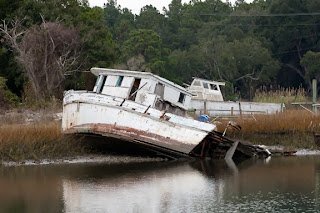 While we are laying over Jim is baking bread. We have the luxury of having an oven. I made a blueberry crumble cake earlier. Jim made the most delicious omelet with potatoes, onions, white cheddar cheese, and roasted red peppers. When we're in an anchorage or at a dock, we can bake and cook because we have the time. When we're moving, our time is spent reading charts, plotting courses, and being alert and aware of boats, tides, floating objects, and following the coastal markers so that we don't go aground. Navigating is a full time job. Then when we're sailing, that's another story. I get to take photos when I get tired of being at the helm.

Nov.18: We made it to Beaufort (North Carolina). Left early this am and encountered fog in the Bay River and the Neuse River. It was pretty nerve wracking. We had 1/2 mile visibility and used our chart plotter to navigate, but I still follow the paper charts and keep track of where we are. It takes two of us to navigate and watch out for barges which are really huge. We did have visibility for 1/2 mile or so unlike yesterday when boats were out there with no visibility. When we left our anchorage in Campbell Creek, there was no fog. There were very few boats out today on the water compared to yesterday when visibility was practically zero. Go figure. We had a hard time following the markers because we couldn't see them.  We relied on our chart plotter and it was accurate. Of course, I was following the paper charts, but if you can't find the markers. . .  Coming into the harbor was really tricky. You are surrounded by shallow water, somewhat nerve racking and Jim crossed one point where we sounded 5.9 feet. We made it though.

Nov. 24: I was thrilled when I saw my first dolphin. I love those animals. It has been and is an amazing journey. Fortunately, I have Jim to share it with. It's my dream and he is helping me live it! It is challenging, and not everyone could live this life style. It's been quite the adventure. 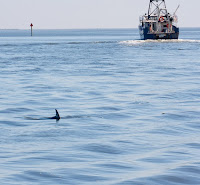 
We will probably be traveling on Thanksgiving Day. Hope to celebrate it at St. James Marina near Southport NC where we are going next to wait out some more bad weather. It should be interesting tomorrow when we start out and the temp is 31. The winds have died down, so we have to take the opportunity to travel. There are small craft warnings up and down the East Coast, but it's going to be OK where we are going.

We are at St. James Plantation Marina, a multimillion dollar development of houses, condos, golf courses etc. We are only stopping here because of the weather really sucks. It was 31 this morning when we started out at 7:30. I had long underwear and several layers and still was freezing my butt off, and Jim had to be extra careful in bringing up the anchor because the deck was icy. Now we are plugged into shore power and have heat.

While here we played a game of chess to pass the time. I'd rather play Scrabble, but I beat Jim at chess once in a while when he makes mistakes. We really haven't had time to play scrabble or chess because we go to bed early so that we can get up at 5:00 to get ready to travel down the ICW. The weather is 15-25 degrees below normal for this time of the year. When we traveled this same route 28 years ago, a couple of weeks earlier in November, it was beautiful. 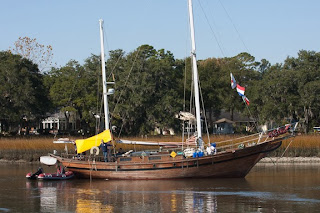 Jim: Just after Charleston we had to pass through Elliott Cut. It is narrow, broken rock on both sides, and the current runs up to five knots through it. The wood boat was waiting for slack tide. I misjudged and we entered the cut with the current against us. It took us almost a half hour to go a half mile. At times we seemed not to be moving at all, and all I could think of was what a terrible time it would be to have an engine failure!


We are going to find a place to stop for awhile and just have an R & R. We can stop anywhere we want to along the coast. We are both getting tired of this bad weather and not being able to travel more often. We both like the traveling part and we do meet a lot of interesting people along the way.

The weather has been too bad to even think about going outside on the ocean. We also have to watch the tide tables because we have a really tall mast and need 64 ft clearance under bridges. Some bridges only have a clearance of 64 feet and that's a real problem for us, as we can't go under those bridges at high tide without risking major damage to lights, antennas and/or our mast. That would be very serious and stop our travels.

I'm usually on my back looking up as we go under the bridges. This one is supposed to have a clearance of 65 feet, but you can see by the waterline that it's below 64. We decided to give it a go. I wasn't looking because Jim had left the helm to Captain Braveheart. Just as we went under, I heard this loud thunk. I thought that we had hit until Jim told me that it was just a car going over the bridge.

We are in an anchorage right now waiting for the right time to navigate another problem area in the ICW. It seems there are many. Yesterday we went under our first bridge that had a 64 ft clearance and we didn't touch!

Dec. 4: We are in South Carolina, a short day's run from Beaufort. We plan to hang out there for a little while to rest up. This traveling every day is rough, but we've been having some beautiful days---finally! Every day we spot dolphins, sometimes quite close. We try to get photos, but they appear and disappear so quickly that it is almost impossible. We don't remember seeing so many 28 years ago until we got farther south, but then there is a lot we don't remember about passing through this area 28 years ago. (There's a lot we just don't remember about 28 years ago!) We are heading for Beaufort, SC, this morning and will spend Christmas there. We will be there for a month and then head on South again. It will be good to stop and regroup.

We made it through the Ashepoo-Coosaw Cut (don't you love the name?), the latest ICW trouble spot. We waited at Fenwick Island for high tide, and as we were waiting, a huge double barge with a tug at both ends came through. We figured that they had timed it for the high tide, too, and if they could make it we could. Well, our lowest depth reading was 9 feet. Take away 7 feet for the tide, and at low tide there would have been just two feet of water in the cut! 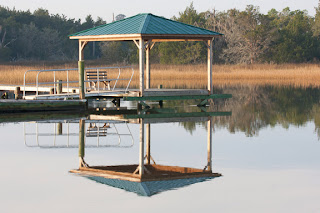 As soon as we docked the boat, we started meeting other boaters and having great conversations. The locals are very friendly to boaters. We both felt that we made the right decision to stop here for a month and recoup from all that nasty, cold weather we had to endure. The sun felt so good.

We are in Beaufort SC for 1 month, and loving it.  We finally hit some warm weather and I shed my long underwear as soon as we docked the boat.  Beaufort is a wonderful small town with lots of culture. There are several performances that we will be attending in Dec. and a big Gullah performance/celebration this Fri that we want to attend. There will be artists, food, and stage performances. It should be fun. The Gullah were slaves and they have their own language and culture in SC. It should be an interesting and entertaining evening.  This weekend there will be a boat parade and the boats will be decorated for X-mas. We'll be able to watch them on the dock.

You can find a lot more history about the Gullah here: http://en.wikipedia.org/wiki/Gullah

The people here in Beaufort are extremely friendly and go out of their way to make you feel at home. We hang out at a bar called "Luther's", a hangout for the locals, and are already known by the bartender and wait staff. Originally a pharmacy founded in 1906, their motto is "Good for what Ales you." We are not sure when we will leave. 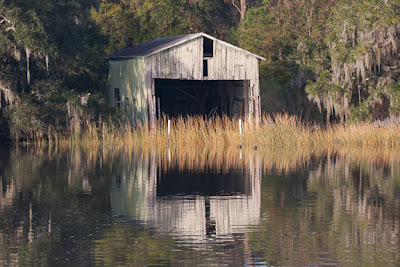 Posted by Fotogypsies at 7:57 AM