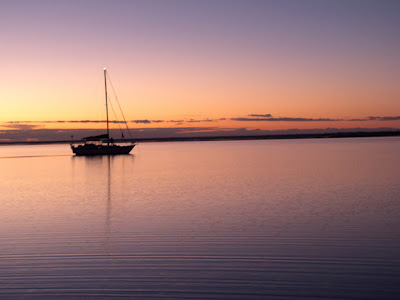 Angie has been promoted from First Mate to Co-Captain. Not only that, but she has been awarded the appellation "Captain Braveheart" for stellar performance beyond the call of duty. How did this come about? There are several stretches along the ICW that the guide books list as "ICW trouble spots." To understand this, you have to know that the ICW is a hodgepodge of waterways made up of canals connecting rivers, bays, and sounds. So you can be motoring (almost always motoring unless you are extremely lucky to catch the right combination of room, wind direction, and current) along a narrow ditch at one time, then crossing a large sound that looks like it has plenty of water but only a narrow band of it is deep enough to accommodate anything but a canoe, then heading down (or up) a river being pushed along or bucked by a swift current. Along the way there are fixed bridges that, in our case, have to be timed for clearance, bascule and swing bridges with set opening times that have to be planned for. 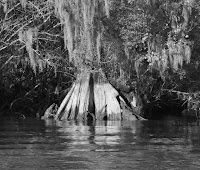 This whole system has a "project depth" of 12 feet, which means that at low tide (or what is officially called mean lower low water) there should be at least 6 feet of water under our keel, and the bridges are supposed to have a minimum of 65 foot clearance at high water, which means that we should have at least a foot of air between any part of the bridge and the instruments on top of our mast. But then there is the reality, and hence the "ICW trouble spots." For example a couple of days ago we passed through a section of the waterway affectionately called The Rock Pile by boaters. This is how it is described on the official NOAA charts: "Numerous rock ledges have been reported abutting the deep portion of the Intracoastal Waterway channel from Nixon Crossroads to Latitude 33.42.51 N. Mariners should use extreme caution in this area." The narrowest and rockiest stretch is "The Rock Pile." Narrow means that if we happened to meet a tug in this area, one of us might have to go into the rocks to avoid a collision. 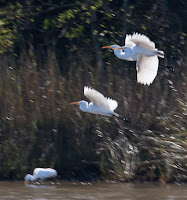 In the past when we came to difficult areas Angie has passed the wheel off to me, but she was steering when we came to the Rock Pile, and showed no interest in relinquishing command. In fact, she had a look on her face that said, "What's so hard about this?" It must have been her experience avoiding the rocks while whitewater canoeing that gave her such confidence. Anyway there was nothing left for the Nervous Nelly of a captain to do but go up on the foredeck and pretend to be helping us to avoid obstacles.

Then there was was the Lafayette Bridge. In North Carolina, where there are several bridges with clearances reportedly less than 65 feet, most of the bridges have gauges which show the water level. But in South Carolina they have dispensed with that nicety. Also, in South Carolina, the tides are greater and the currents swifter. So as we approached the Lafayette Bridge, we were racing along at about 9 and a half miles an hour. That may not sound like racing to you, but it is 50 percent above our normal cruising speed, and faster than the boat is theoretically capable of going according to some complicated calculation that only naval architects understand. And the fact that the current was sweeping us toward the bridge was not a good thing in case at the last moment we decided we would not clear. So as we approached, we watched the water level on all of the markers and pilings we passed, trying to see how much the tide had fallen from high tide. It appeared that the water was down about a foot. Of course, there was no gauge on the bridge to verify this, but Angie lined Bel Canto up and charged through the narrow space between the bridge stanchions like she was running a chute between rocks on a whitewater rapids. 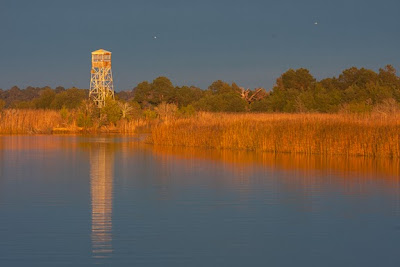 There are the trouble spots where "frequent shoaling has been reported in this area." These are usually places where the waterway crosses inlets from the ocean, or where you are transversing a river delta. Then the usual reading of 10 or 12 or above on our depth sounder can quickly drop to 7 or 6 or even 5. I guess this is why they call it mean low water. So again, we try to cross these at mid or high tide, but that isn't always enough. Angie was guiding Bel Canto through one of these spots when the depth began to drop. It was above "lower low water," so I said, "Keep your courage up, Angie." She did a great job of getting us through, although the alarm on our depth meter kept going off. Ever since then, when we hit a low spot, she says, "I'm keeping my courage up!" and she does.


So what makes the stress, and getting up at 5 a.m. on frigid mornings to make use of the limited daylight, worth it? For the last three or four days we have passed through some beautiful scenery. Cyprus swamps and savannahs and low sand dunes and spent our nights in delightful anchorages. Yesterday we saw two bald eagles resting atop a dead tree as we left our anchorage, and today, several times we spotted dolphins fishing along the edge of the channel. Every day there is something new to experience. One thing sure, we are never bored. 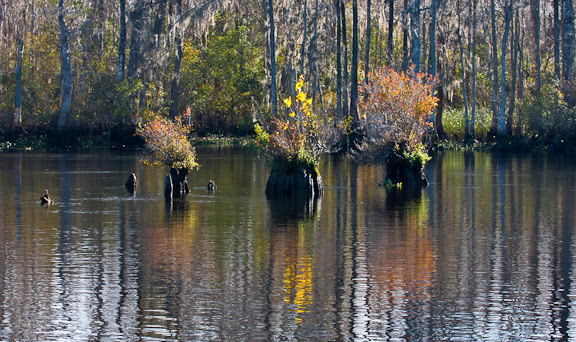 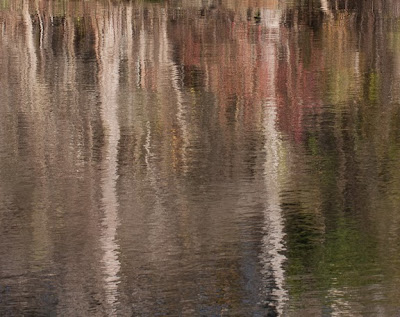 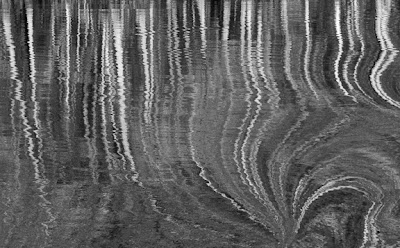 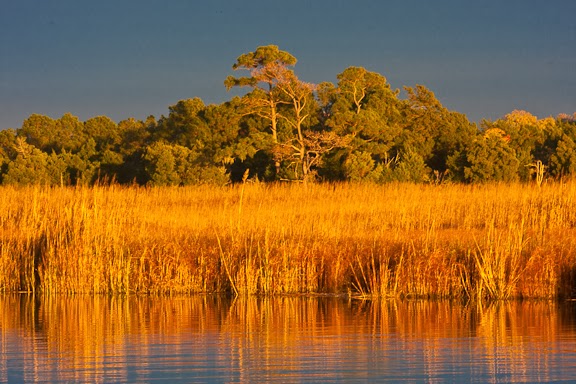 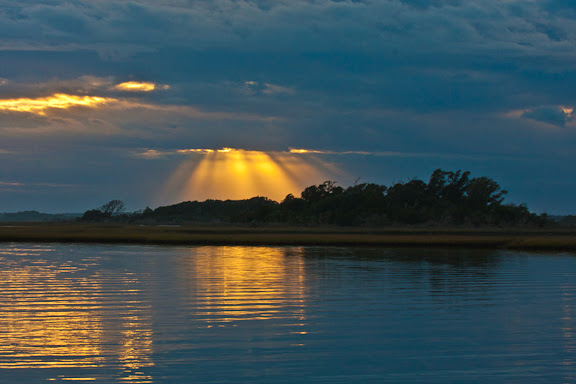 Posted by Fotogypsies at 6:06 PM