More Drama on the Waterway

There’s never a shortage of drama. The day before yesterday we came into this spacious anchorage in Wrightsville Beach, NC, only a few boats, settled weather. So we get up the next morning and there is a little blue boat, no name or registration number, anchored kind of close to us, but Jim thinks it is going going to be all right. Well we get up this morning, and when we look out he is uncomfortably close. The wind is opposing the current, and when that happens, Bel Canto has the habit of riding up on her anchor chain. It is not all right—Bel Canto is about twenty feet from the blue boat. Jim starts the engine to avoid a collision, and the captain of the other boat comes up to see what is going on. Jim says, “We are too close. One of us has to move.” Well, the law, or at least the custom, is that the first boat to anchor has the right of way, but this guy tells Jim that he is having a problem with his transmission. So we pull up the anchor and find a new spot. Anchoring in a crowded anchorage is not my favorite maneuver, but about an hour later we are set again in a spot far enough from all of the other boats. Then this afternoon, Sea Tow brings in a disabled boat and they anchor about a hundred feet from us. Jim radios the captain of the Sea Tow boat and tells him that he thinks they are too close. Sea Tow says that as long as we all swing the same way we’ll be fine, but Jim tells him that that isn’t what happens. Sea Tow knows the rules, and reluctantly moves the disabled boat away from us.
After the excitement at McCellanville, we made it up to Georgetown without any problems. There’s no good place to anchor there, and we had reserved a space at Hazzard Marine. Hazzard Marine has a face dock, a long pier parallel to the water, which I like because it makes it easy to dock the boat, and Susan, the dockmaster did a great job of helping us with the lines. Across the dock from us was the boat Salt Shaker, that had been on a mooring near us in Beaufort, SC. Walter and Gwen, the crew on Salt Shaker, told us about the mooring field in Beaufort drama that we had missed. The winds were blowing about 25 knots, and a boat anchored just outside the mooring field began to drag into the mooring field. It just missed Salt Shaker but dragged into a boat near them and did about two thousand dollars worth of damage. This boat also had a faulty transmission. TowBoatUS towed them to to the town dock, which made the rest of the boats in the mooring field happy.

From Georgetown we went up the waterway and anchored in Bull Creek, one of our favorite anchorages on the Wacamaw River. It is a fairly deep creek, fourteen to eighteen feet all over, and surrounded by trees, so a lot more protected than the marsh grass anchorages farther south in South Carolina. We were all alone, but the next morning as we were pulling up anchor, another blue hulled double ender, Grace,  passed us. They had come in when we were below and anchored farther up the creek. We met them later in Southport and they told us that when they came into the creek and saw us they said, “Look, we are already here.” 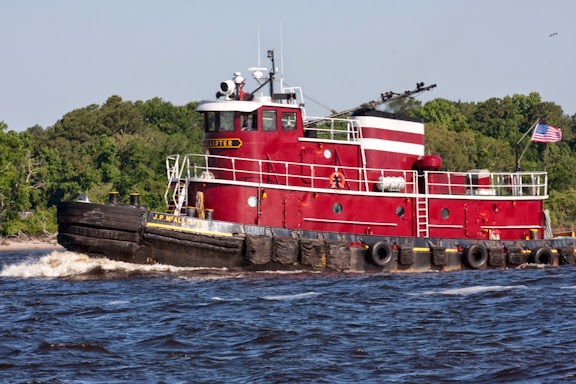 In Bull Creek we studied the waterway on up to Southport, NC, and decided we’d rather avoid all of the shallow spots and problem bridges, so we back tracked to Georgetown and anchored in Wynyah Bay, near the ocean, waiting for the right time to make another ocean passage so that we would arrive in Southport after daylight. At five thirty we pulled up the anchor. It took us two and a half hours to make it out into the ocean clear of all of the shoals against a two to three knot current, but we made it before dark. We had a southwest wind of about 10 knots and were able to sail for about four hours and motorsail the rest of the way. It was a pleasant sail under a full moon, and we got into the channel of the Cape Fear River around seven a.m.

The man made harbor at Southport is tight with fairly shallow water. We had hoped to dock at the face dock, but the harbor master told us they were saving that for “bigger boats,” and directed us to a T-dock behind a big catamaran. It was a tight turn, and Jim was going as slowly as possible, as he always does. The wind caught the bow and we could see we weren’t going to make it. Jim threw the boat into reverse. Bel Canto has a mind of her own in reverse, and as we neared the bank behind us we hoped that there was enough water that we wouldn’t go aground. Jim got the boat turning the right way, I threw the dock hand a spring line, and we eased in behind the catamaran.
Southport turned out to be a timely stop. When we plugged into shore power, we discovered that our inverter/battery charger had crapped out. We already knew that the pump to the hose that we use to clean the mud off the anchor chain had failed, so we got them both replaced. Steve, the service manager, and Jeff, the electrician, knocked themselves out and we were soon ready to go again. Jim thought he had died and gone to heaven because he no longer had to dip a bucket to wash down the anchor chain.

At first I didn’t care much for Southport. After we arrived we set out looking for a breakfast/lunch place. We walked about a mile before we found a place called “Locals,” the only place that serves a full breakfast in Southport. By the time we got there we decided that lunch was more appropriate and ordered fish and chips. Most of the food on the menu was deep fried, not our usual fare, but hungry and dead tired after a night on the water, we just needed food. So my first impressions of the town weren’t very good.

But on the way back to the boat we passed a place called the Wine Rack. We stopped in and the owner told us about the Friday night wine tasting. He showed me the list of featured wines, a pinot noir, pinot grigio, chardonnay, Barbera, and a Tempranillo, all my favorite wines. I told him we would be back. He also sold premium coffee, and we bought a pound of Guatemalan. Then we kept walking and discovered the really cool section of Southport, down by the river. After we rested up this was where we hung out. We had some great sword fish, salmon, and grouper dinners at the Fishy Fishy and at Provision Seafood. They are both funky little places that reminded me of Key West in the Seventies. We listened to some great music at Fishy Fishy by two guitarists, one of whom had been on the road with Tina Turner among others.

The Friday night wine tasting was another hit. It cost five dollars a person, but if you bought a bottle of wine you got the five dollars back. They had great snacking food, crackers and cheese, salami, chips, spinach dip, and salsa. A glass of wine was five dollars for a generous serving. We ended up getting a bottle of the Barbera. So after further exploration of the town, I changed my opinion. Good food, good wine, good music and kind people will do it every time.

Posted by Fotogypsies at 6:39 PM