Because the wind had calmed down, I thought that going the short distance from Fort Monroe to Norfolk would be peaceful and quiet. Wrong! I was steering the boat as Jim washed down and secured the anchor when I saw this big tugboat heading toward me. I changed course to avoid him, and he pulled into a dock near the entrance to the harbor. Minutes later I looked back and there were TWO tugs on my tail. The first was lashed to the second. Then as I look ahead for the next marker, this gigantic cruise ship crosses the entrance to the harbor. I had a flashback to being in the East River in New York City with all of the  cargo ships, ferries and tugs and boats of all kinds. 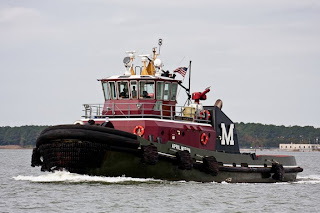 As we got out into Hampton Roads we were in rolling waves. The tugs veered off and stopped following me and we made our way to Norfolk, passing the piers where the Navy aircraft carriers are docked. Twenty eight years ago, as we passed into Norfolk, one of these ships was leaving its dock and hailed us with their hailer: "Sailboat, get out of the way. This is the Navy." This time they stayed put, but we noticed something new. Every time we passed anything belonging to the Navy, a patrol boat would be running parallel to our course, between the Navy ship and us. I wanted to tell them that we were the good guys, not terrorists.

As we made our way into Norfolk, I decided that I had been at the helm long enough--I wanted to get out my "real" camera with the 70-300 mm lens that I had purchased for the trip. It's a heavy lens, but I was able to hand-hold it and take photos in between waves. This was the most fun I had had in three days. 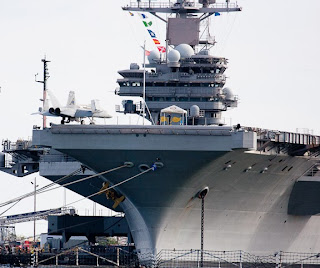 The entrance to Norfolk is lined with Navy destroyers and aircraft carriers, cargo ships, ferries, all types of cranes, industrial tugs, cruise ships both power and sail, as well as pleasure boats. This is a real working harbor, as well as the one of the biggest naval bases in the world, so you have to watch out for all of this traffic. As we made our way in, the captain of a huge cargo carrier leaving its berth radioed us and asked us to cross to the green side of the channel. "Then there will be room for both of us," he said. This, of course, put us on the "wrong" side as far as the Navy was concerned and brought out the patrol boats. 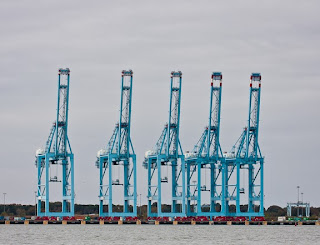 Gigantic cranes for loading the cargo ships make colorful patterns against the sky. 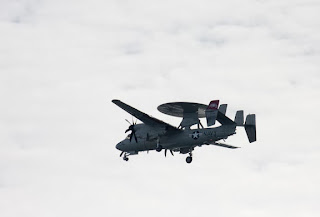 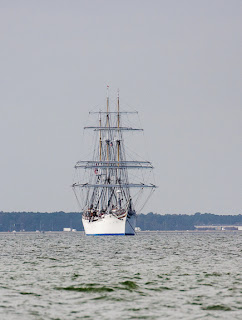 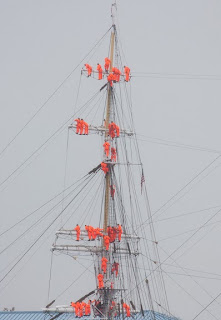 A schooner waits at anchor to enter the harbor, and later, the crew mans the tops'ls. 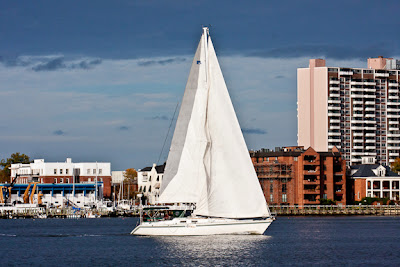 This photograph of a sailboat on the Elizabeth River at Norfolk reminded me of a Delacroix painting.

"The wind is blowin' harder now,  thirty knots or thereabouts.
White caps on the ocean, and I'm lookin' for waterspouts.
Squalls out on the Gulf Stream, big storms coming soon. . ."

(by memory from) Jimmy Buffet

We are tied up to the pier at Coinjock (they sell tee shirts here that say "Where the hell is Coinjock?"), just fifty miles south of Norfolk. We had expected progress to be slow down the ICW (Intracoastal Waterway), but it has been SLOW. After holding up for two days at Old Point Comfort, Fort Monroe for the winds to slack off (see our last blog), we finally decided that they had calmed enough for us to go on to the anchorage off Portsmouth, across the river from Norfolk. But then another mean mother from the North came through.

We didn't mind spending a couple of days in Portsmouth. It has a picturesque old town section (quaintly called Olde Towne), very friendly to cruising sailors. When we stopped at the little marine hardware shop appropriately named Mile Marker 0, since this is where the ICW officially begins, and innocently asked the owner, Bob McBride, where we could buy some beer and wine, he offered to take us to the Food Lion, which, like all harbor town grocery stores is located over two miles from the harbor. (We had heard he would.) Not only did he take us but he offered to come and pick us up when we were done shopping and deliver us to our dinghy, all for a hug from Angie. Of course, we took advantage of this to carry back another fifteen bags or so of provisions.

When we finally left Norfolk/Portsmouth we got a bit of bad news. When we radioed a bridge about seven miles from Mile Marker 0, the bridge tender asked us if we knew that The Great Bridge Lock, the one lock we have to pass through on the waterway, about 12 miles down, was closed. The lock had shut down because of a malfunctioning valve., and nobody knew how long it was going to take to evaluate the problem, form a repair plan, and carry it out. This was on a Tuesday.  On Wednesday we heard that it would "possibly" be open for a few hours each day, at low tide. The next low tide that would correspond with better weather and the opening of a bridge we had to go through on the way there was Saturday. A number of boats couldn't wait and left the anchorage to "go outside" around Cape Hatteras, a notorious graveyard for ships. Soon we began hearing the Maydays and calls to the Coast Guard. Five broke down, either dismasted or with broken rudders, and had to be rescued. We patted ourselves on the backs for our discretion. Saturday turned out to be a beautiful travel day, and soon after sunrise, we were on our way South.

But not soon enough. When we reached the bridge we found that it had just closed and that we would have to wait an hour for it to reopen. As a result we arrived at the Great Bridge Lock at about eleven o'clock, just in time to make the last opening until seven o'clock that night. As you can imagine, we were happy to make it through the lock, but we decided it was too late to go on to the next convenient stop, which was Coinjock. Not only were we beat, but we would be lucky to make it before dark. So, after passing through the Great Bridge Bridge (yes, that's the name) we tied up to the free dock at Great Bridge, a little way down the road. There we learned that Great Bridge is the site of the first Revolutionary War battle fought in Virginia and the first victory by the Colonial troops.

The weather was beautiful when we arrived in Coinjock on Sunday, sunny and about 60 degrees. And Monday looked to be as nice, but the forecast was ominous. On our next leg we have to cross Albemarle Sound, a fairly wide body of open water, and then anchor somewhere along the Alligator River. Pretty much all cyprus swamp wilderness with no marinas and no real harbors. And the weather forecast was for two days of gale force winds and temperatures dipping below freezing. We decided that discretion was the better side of valor. So here we are, tied up to the dock at the Midway Marina in Coinjock, sheltered from the howling wind and sleet (yes, sleet) outside and feeling Bel Canto straining against her mooring lines. The good news is that, since we are at a marina, we have shore power, which means we can have heat without using our diesel heater. And there is a friendly little restaurant here that, last night, opened up just for us. And after this front passes, the forecast is for four days of good weather, which should get us down to Oriental, North Carolina. Knock on wood!