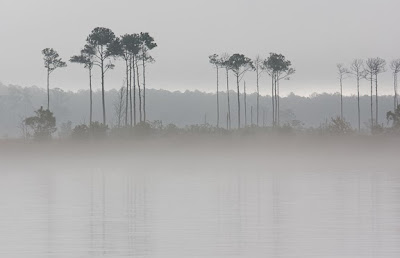 Did you ever have one of those dreams where you are running in deep muck, struggling to move your legs, not getting anywhere? It sometimes feels that way to us trying to get down the intracoastal waterway. I am sitting here at my typewriter (computer I meant to say--shows my age) listening to the gale force winds howl and trying to figure out when we can make our next move. We stayed three nights in a beautiful little anchorage called Campbell Creek, one day by choice, and the second because the fog was so thick that we couldn't see fifty yards ahead. This did give Angie a chance to get out her "real" camera and take some fog, pictures, something that we always enjoy. We spent four days in Beaufort, the first three waiting for the strong winds of another cold front to ease up. We probably could have traveled on the third day, but we were waiting for a package from my nephew Larry, who is handling business for us, and a replacement for the chimney of our trawler lantern, which broke because I let it heat up too fast. Finally last Thursday we pushed off the dock in Town Creek in time to catch the opening of the bridge we had to go through at the beginning of our day's run. It was a beautiful day, clear skies, warm compared to the weather we'd been having--a perfect day for moving down the waterway. We were feeling great. We even saw some dolphins swimming in the inlet where the ocean meets the Intracoastal Waterway at Moorehead City and that made us feel even better, as we consider them good omens. Then we approached the the first bridge we had to go UNDER.

If you've been following the blog, you might remember us saying that Bel Canto has a mast so tall that we have to duck to go under bridges. That was a joke, but the official height of our mast, or vertical draft as we sailors like to say, is 64 feet. All bridges along the ICW are supposed to have a clearance of 65 feet. That's 65 feet above the water level at the average high tide, which is something you have to think about when you are sailing in coastal regions. Well, in North Carolina they like to do things differently, and there are several bridges that only clear 64 feet. And a super high tide can bring that down to 63. There is a usually gauge on the bridge where you pass through that tells you what the actual water level is. If you get it wrong, you can rip all of the instruments off the top of your mast, or worse, bring the mast down. We worried about this, so while we were in Annapolis we had Todd, one of Ted's employees, go up the mast in a bosun's chair with a long tape measure. I could have done this myself, and 28 years ago on Escapade I enjoyed doing it. But somehow this far along in the eighth decade of my life, I am not so eager to view the world from that perspective. 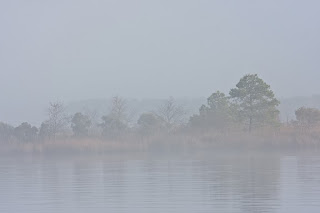 Anyway, after taking careful measurements we calculated that our mast, including the instruments and radio antenna reached 63 feet and six inches above the water. Giving a six inch margin of error, that makes 64 feet, and we'd like to have another foot or so on top of that not to feel too nervous about it. Our first challenge was the notorious Wilkerson Bridge. Wilkerson Bridge is at the end of the 25 mile Alligator-Pungo Canal. There is no tide in the canal, but the water level does fluctuate when the wind drives water from the Pungo River up to into the canal. As we approached we kept looking at the water level on the cypress stumps and markers along the sides of the canal, trying to see if it was high or low. It was a calm day and the level seemed low, but that didn't keep us from being nervous as we approached the bridge.  We knew that if we couldn't make it under, we had a four hour trip back to where we could anchor. When we got to the bridge we saw that the gauge read 65. It's best for your heart if you don't look up when you go under, but Angie did anyway. It always seems that you are going to hit, even if the bridge is 165 feet high. When we made it through we high fived each other, and I gave a big holler to release the adrenalin I'd been building up.

Well we weren't so lucky this time. As we approached the Atlantic Beach Bridge outside of Beaufort, Angie read the gauge and it read 63 feet. I wheeled the boat around, and while Angie steered I went below to check the tide tables. We were on a rising tide, a full moon rising tide at that, and by the time the water level would drop enough for us to go through it would be too late for us to reach our next anchorage. So back we went to Beaufort for another day. Now Beaufort is an interesting little town, but we didn't need to spend another day there. Especially not a beautiful day for enjoying the sights along the waterway.

Friday we were up at 5 a.m., getting the boat ready to leave as soon as it was light enough to see. This time we made it under the bridge at mid tide with a foot to spare. It was an interesting day traveling through bays and sounds where it looked like there was plenty of water, but most of it was only two or three feet deep. The waterway cuts a narrow path through this where you have to watch the marks very carefully to be sure you are not drifting out of the channel. By two o'clock we were anchored in Mile Hammock Bay, on the Marine reservation Camp LeJeune. This was after transiting the Camp LeJeune firing range which is closed every other hour for firing practice. When we came through here 28 years ago, we were caught by surprise, stopped by a guard boat full of marines and told we had to anchor there and wait until the waterway opened up again. The current was fierce, and when we anchored, we snagged something on the bottom. When it was time to go a couple of marines in a launch helped us retrieve the anchor, and we rewarded them with a couple of beers. 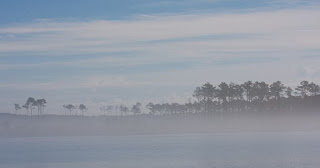 There were about a dozen boats anchored in Mile Hammock Bay and we all got to be entertained by the planes and helicopters flying overhead. We all left about the same time yesterday morning timed around the first bridge we would reach which only opened once every hour. The rest of our day was spent trying to time several more bridges that either opened once every half hour or once an hour. If you reach the bridge too late you have to mark time in place until the next opening, which is not exactly easy to do when the current is trying to move you along at a couple of miles an hour. Fortunately we fell in with some boats whose GPS timed their arrival to the minute (if ours does that, I haven't figured out how) and we could adjust our pace to arrive at the bridge when it was just about to open.

So here we are at Wrightsville Beach. Gale force winds are predicted for the rest of the day all up and down the coast. It's a protected anchorage and our anchor is dug in well, so we are secure for the time being, even though Bel Canto is rocking and rolling in the waves and current. Tomorrow might be OK for traveling, even though ii is going to be 31 degrees when we wake up at 5 a.m. to get ready to go, and then we are expecting another couple of days of bad weather. We were hoping to reach Charleston by Thanksgiving, but at this rate we may be lucky to be there by Christmas. Are we having fun yet? The truth is that with all these stresses and worries, we appreciate every sunrise and sunset, every heron, pelican and dolphin sighted, every beautiful landscape we pass through, all our friends and family (that includes you, too, Ted), and especially each other, more than we can say.

Posted by Fotogypsies at 3:53 PM